Microsoft Teams went GA this week.  I took it for a test drive Wednesday night, and I couldn’t believe what I got done in just an hour (be forewarned: the screenshots were taken Friday when I wrote this blog!)…

This is the typical case for Microsoft Teams: collaborate with a team (get it?) on a business process.

I work with our other directors, our partners and our sales team to collaborate on sales pursuits.  Our current process uses SharePoint document sets, but it’s a little cumbersome, so I built a new process in Teams.

We’re all on the team– the 4 other directors, the partners and the sales team.  Different sub-groups of us collaborate on different pursuits, so we create a channel for each pursuit.  This automatically creates a folder in the SharePoint Documents library on the Team site, accessible in the Files tab for each channel.

2. Chatted with my team and @mentioned team members by name

Another cut-and-dry use case here, but it’s smooth as butter.  Anyone I @mention gets a notification. 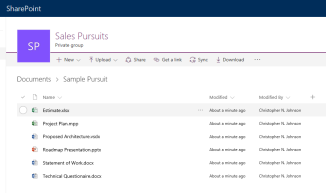 I also downloaded Teams app for iOS.  Works as expected, and I get notifications when someone @mentions me.

I can send images, gifs and smileys right inside the rich text message editor.  There’s even a handy meme generator for putting my coworkers in their place:

With a proposal due Friday, I decided it made sense to pin our roadmap presentation to our pursuit channel to make it easier for everyone to find.  Teams let me choose the document to pin and added the tab (which I renamed to “Roadmap Deck”).  Clicking the tab shows the presentation and allows me to edit it in PowerPoint or PowerPoint Online. 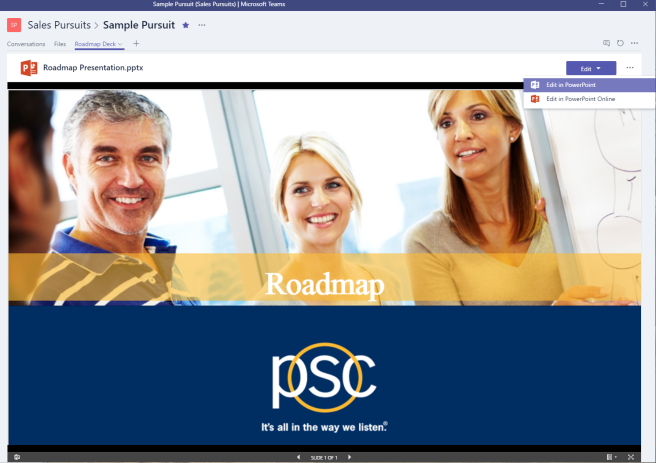 The possibilities here speak for themselves: if you need to collaborate around a document for a short period of time, or you use something like an Excel workbook to manage a team process, pinning a document as a channel tab just makes too much sense.

5. Created a Wiki to help the old fogies learn how to use Teams

This is one of those features I didn’t know I needed until I used it.  When I created my Sales Pursuits team, I noticed a Wiki tab was created in the General channel (in fact, a Wiki tab gets created for every channel by default).  I renamed the tab to “Using Teams for Sales Pursuits” and began filling it with how-to instructions to help some of my less-technically-inclined coworkers learn how to use Teams for collaborating on pursuits.

I created two pages, each of which appeared in the Wiki navigation with sections on the page listed beneath it for easy navigation. I imagine this being even more essential when Microsoft opens up Teams for external users. 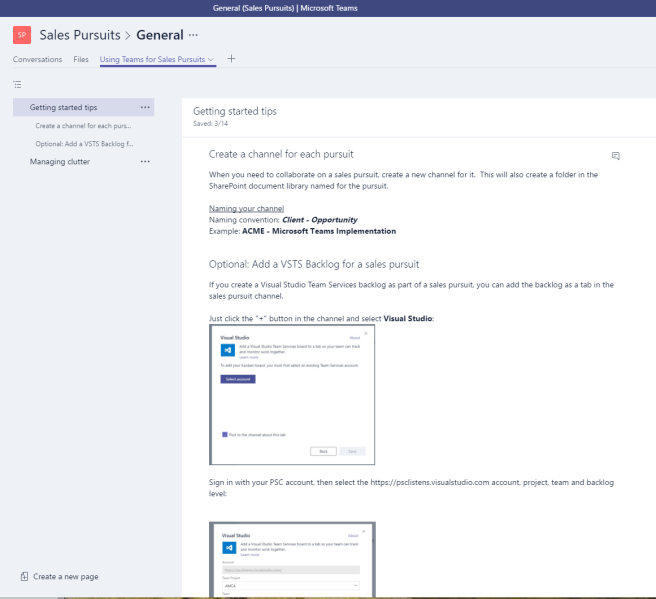 6. Cut the clutter from my list of Teams and Channels

One hour is all it took for me and the other geeks at PSC to start creating teams an inviting everyone and their brother to join them.  So I favorited the teams and channels I cared about and hid the rest.

Hiding a team channel is easy, too. Just remove it as a favorite (by default, channels you create are marked as favorites):

7. Connected my team to a different SharePoint document library

I already mentioned that we had a document-set-based collaboration process for sales pursuits.  I know that introducing new technology without a change management plan is bad practice, so I added a tab to our General channel so my team can easily find all the documents in our “legacy” SharePoint site.

Once the site is loaded, I picked the document library I wanted in my tab from the list of site libraries:

I even got the option to rename my tab and post about it in the conversations for the channel: 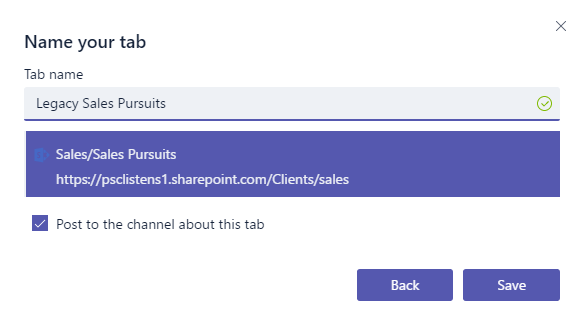 8. Added a new Team on top of an existing Office 365 Group

We recently began using Office Groups for each of our client projects; when we start a project, we create a Project Group for the project team and our clients.

Of course, I wanted to spread the Teams love to my project teams using existing Office 365 Groups.  In Apple-like fashion, it just worked.

When creating a new team, I had the option to add a Team to an existing Office 365 Group:

Sure, there’s a safety checkbox, but be careful.  You’ve been warned.

9. Created a Planner plan for my project Team

We’ve gotten in the habit of using Planner to handle PM for our small-to-midsize projects because Microsoft Project is just overkill unless the project is large and we’re managing 5+ resources.

After adding a new tab to the project team’s General channel and choosing Planner, I got to choose between creating a new plan or using an existing one (for Teams created from existing Office 365 Groups, chances are you already have a Planner plan created for your group).  This means that Teams opens up the ability to create multiple plans for a single Office 365 Group, which was not previously possible.

Boom! My plan showed up in the Planner tab and I could immediately create and move cards and buckets.

10. Added Kanban board tabs to track features and user stories

This is where Teams’ potential to revolutionize our project collaboration flow really began to stand out.

We decided to use the project team’s General channel for PM work and handle all of our development conversation in a separate, nerdier Dev channel.  And you can’t spell modern development PM without “K-a-n-b-a-n”, right?

And on our Dev channel, I added a Kanban board for user stories:

11. Pinged some code with Markdown

Speaking of our Dev channel, it turns out that Teams announced full support for Markdown (including pre-formatted code!) in chat:

Still on the Dev thing, although the PM in me appreciates this one, too.

We already use Power BI to roll up bug, build, sprint and Git commit/pull request reports from our Visual Studio Team Services projects.  A couple weeks ago, I geeked out about the ability to embed these dashboards in modern SharePoint sites with the new Power BI SPFx web part.

Welp, you can do the same thing in Teams, now, and it’s awesome:

This next one makes the case for being able to stay in Teams for most of my work day.  The Meetings section in the Teams app showed me all my meetings for the day (and coming days) and let me join Skype meetings directly with a single button click.

What didn’t I do?

That’s the beauty… a lot.

In an hour, I did all this (not the blog, that took longer).  The sky is the limit for Teams, and I get the feeling that I haven’t even scratched the surface.  I played with connectors and some of the other tab apps, but the things I covered in this blog were so stupid simple that anyone can do them without training.

Feel free to share this information with anyone who will find it helpful.

View all posts by Chris