I use it all day, every day at work. I also help run my office Fantasy Football league. See where this is headed?

Our consultants work all over the US, so we can’t rely on in-office banter to build the trash-talking culture that is the foundation of all great fantasy leagues.

This year, I decided to run our league out of Teams, just to see if my favorite persistent chat app could provide the same value for non-work-related activities. The results have been surprisingly great so far.

Below are a few things I set up in Teams to make our fantasy season a little more fun– read on to learn more about each one.

1. Multiple leagues: a channel for each league

We have 20 players each year— too many for a single league— so we run two leagues, a Blue and Gold league.

In addition to the General channel, we created a channel for each league to host game day threads and league-specific announcements/trash talk.  More on that later.

Collect team owner info and report on it in Excel 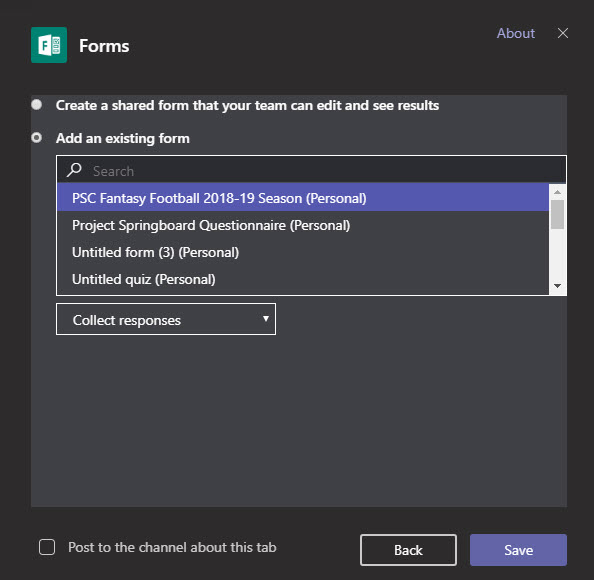 When we first started the PSC FFL, we sent a company-wide email asking every interested owner to email the commissioner with their team details. We eventually evolved to use a SharePoint list, but the user interface wasn’t great and we couldn’t collect responses how we wanted.

Enter Microsoft Forms: I just created a signup form in Forms, then posted the form to as a tab in our General channel so owners could sign up for the FFL season and let us know if they’re attending the draft party. And we still sent a link to the form to the whole company so new owners who weren’t part of the Team could still sign up.

Creating the league sign-up form in Microsoft Forms was as easy as adding a tab in Teams.

To determine draft order, I asked each owner to list their favorite song as part of the sign-up survey. I opened the survey results in Excel, Googled the year the song was released, sorted the survey results by year, and BAM! DRAFT ORDER. Of course, I saved the file to our team Files for transparency 😀

To make sure everyone knew where they were drafting, I @mentioned each team owner when I posted the draft order in our General tab. The result was a solid start to the annual trash talking.

Every league needs a charter so league owners old and new have a place to find the rules. Our League Charter is a Wiki tab in the General Channel and features sections for the following:

Owners can use the Wiki navigation to quickly jump to a section, which can feature inline images, rich text, tables, links, etc.:

Probably the most fun I’ve had with SharePoint, ever.

Each week, I write power rankings and post them as fodder for trash talk. Are they accurate? Nah. Scientific? Nah. Fun to write? Hell yes. And (I think) the rest of the league enjoys reading them.

I write the Power Rankings using the new, modern SharePoint News feature that comes with the SharePoint site for our Team. Creating news is as simple as opening the SharePoint site for the Team and clicking the Add News button, which instantly opens a full-page editor to which I can add an unlimited number of web parts including images, rich text, links, etc. 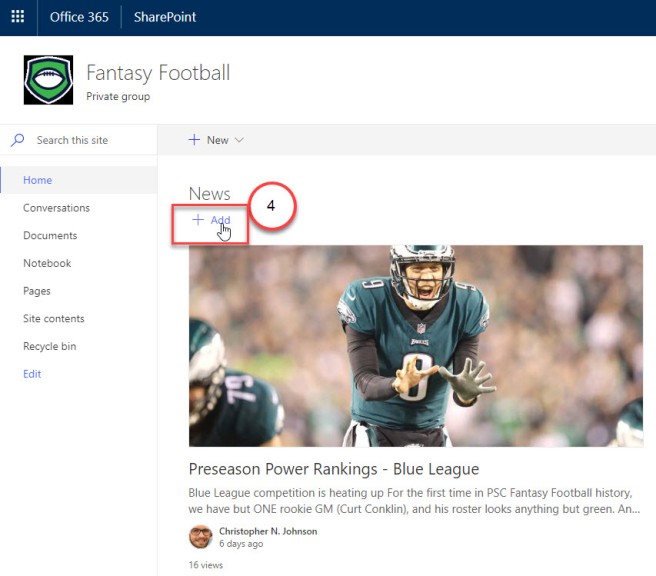 Once on the News page, you are presented with a full canvas for adding rows, columns and web parts. I used the one third left layout and created a row for each Power Ranking.

In the right column of each row, I added a text web part in which I wrote the ranking details.

In the left column of each row, I added the Image web part.

Adding the Image web part opens up a blade where you can select an image or search for one. I just used the Web search option and searched for the picture I wanted. \

Protip: change the image type from “Creative Commons only” to “All” for better results, but be careful not to violate any copyrights.

When I was done editing, I just clicked Post News and voila! It posted to our SharePoint site’s home page.

My Power Rankings pages look nice in SharePoint, they would look better (and get more traffic!) if I add them directly to Teams. To add my newly-authored SharePoint News to our Team, I just added a SharePoint tab in each league’s channel, then selected the News article I wanted to post:

First, I clicked the ellipsis next to the channel name and select Connectors:

I selected the SharePoint News connector, then click Save:

Now, when I post news to SharePoint, a message is automatically created in Teams and my team members can reply to it.

If you’ve ever participated in a Game Day Thread (“GDT”) in a community like Reddit, you know how fun they can be.  In search of a similar experience, I created a GDT for our FFL league to host all of our game day trash talking and it was a rousing success – 77 replies on the first Sunday of the season! 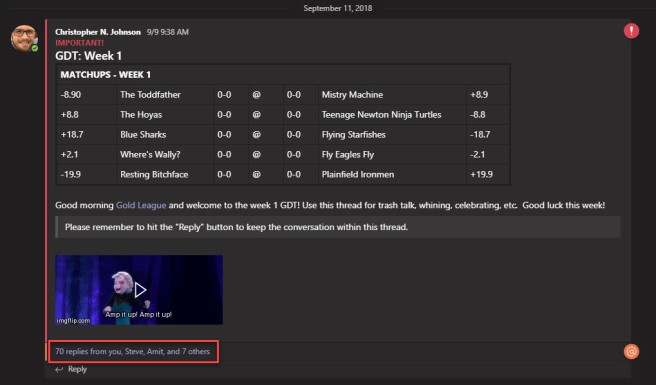 I created a quick “Matchups” spreadsheet in Excel with a table featuring every matchup, each team’s record and the point spread.  I copied the table directly into the Teams message, @entioned the league, added an inspiring GIF, and away we went! Boom, trash talk.

The fact that everyone in our company has Teams on their phone definitely helped here, because we could reply to the conversation from our phones while we sat around all day watching NFL Redzone…

This one took me outside the Microsoft ecosystem, but is a great example of how extensible Teams is and how easy it is to integrate it with other applications– in this case, IFTTT.

First, I created an incoming webhook on my teams’ General channel– this is just a unique URL that can accept REST calls from any application.

Just like adding the SharePoint News connector, I clicked the ellipsis next to the General channel and selected Connectors…

…but this time, I chose the Incoming Webhook connector by clicking Configure next to the connector details.

I named the connector “Fantasy Football News” and uploaded the ESPN logo as the webhook image (so users could see the posts were coming from ESPN), then clicked Create:

If you’re not familiar with IFTTT, it’s a user-configurable workflow tool very much like Microsoft Flow that allows you to respond to events from one service (“if this…“) by taking actions in another service (“then that…”).

First, I selected the “trigger” service for my applet by clicking the “this” link:

I typed “ESPN” to filter the list of available triggers, then clicked it to select it. 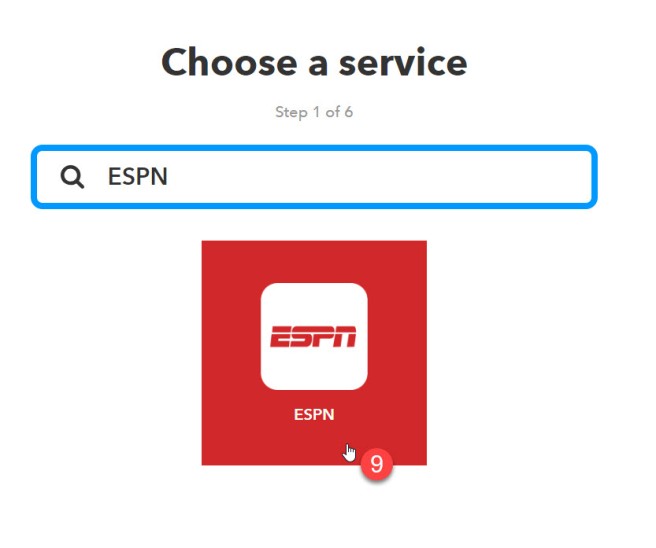 I chose the “Breaking news for sport” trigger and selected “Fantasy Football” for the sport, then clicked Create trigger:

Next, it was time to define “that”– my Teams incoming webhook.  I clicked the “that” link…

…then chose the “Webhook” service… 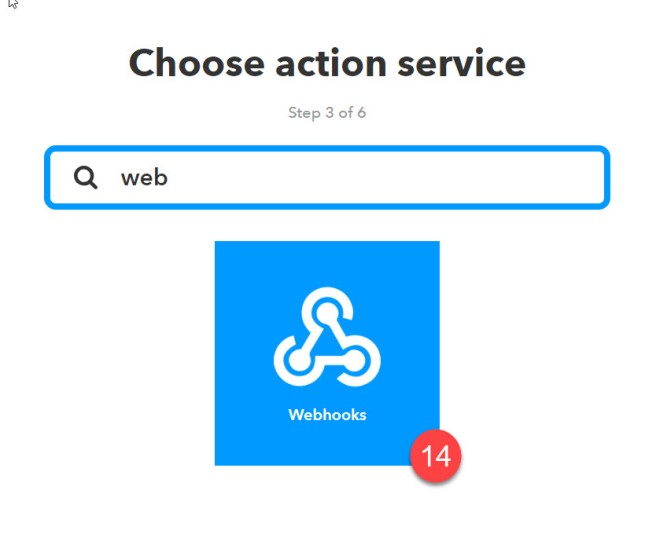 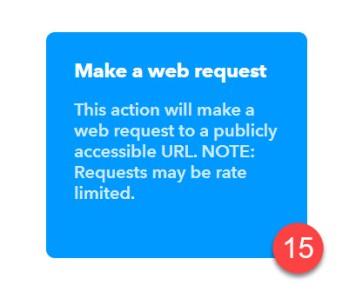 To tell IFTTT to post to Teams, I needed the URL for my webhook.  In Teams, I copied the URL that was generated when I created the webhook…

…then pasted it into the IFTTT webhook configuration in the “URL” field.  I set the following fields:

For the “Body” field, I added JSON text {“text”:””}, then clicked in the middle of the two final quotation marks and inserted the AlertBody ingredient from the ESPN trigger:

After clicking Create action, I renamed my applet and clicked Finish.

That’s it!  Now whenever FFL news breaks, ESPN posts a message in our General channel and our players can comment on it like any other conversation thread:

Feel free to share this information with anyone who will find it helpful.

View all posts by Chris